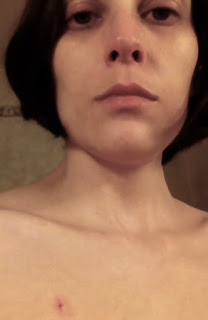 I can tell you that I got a big raise. I can say I was on international TV. I took trips to New Orleans and Montreal, Canada. I spent some time in L.A. I performed on stages. I made stop motion videos shown in an art gallery…

I can also say that my body was artistic all on it’s own. It grew a tumor.

This thing appeared overnight in February. It itched occasionally. It was something I could actually feel change inside my skin. For a little while I even thought it might be a parasite.

Since It was located on my chest I, naturally, went to have it checked out at a ‘boob clinic.’

The woman who ‘saw’ me went on to make backhanded insinuations that I was overreacting. I guess, to her,  I was just behaving like so many hysterical women who come running into the clinic and waste time fussing with every little thing. Because they read too much on the Internet.

Yeah. This superficial lump here on my chest is no reason for alarm. It’s just, oh, you know, a cystic zit. I must be too stupid to tell the difference between a pimple and something- -else.

To my further irritation, she was insistent that I come back and have my lady bits examined- because that is so important right now.

I fumed at her inside my skull: I have a growth on my chest, you unqualified bint. If this ugly thing popped up on your body, I bet you would be in a medical facility ASAP wasting someone’s time about it.

And neither would you want some knob recommending pointless examinations and procedures to you when you specifically have an obvious issue that needs to be addressed immediately.
(Nope.  Not gonna apologize for the wordiness of that sentence.)

After such disparagement, I did NOT go back there to have my lady bits poked and peered at.

What I did was shove my panic down. Way down. For months. Didn’t think about it. Didn’t focus on it. The things is, it didn’t go away.

In December I was able to see a dermatologist. When the doctor checked me out, everything in her demeanor seemed to be frowning at this lump. I could tell it was something she didn’t have an easy answer for. She took a core sample and sent it off to Mexico City for a biopsy.

My early Christmas present was a biopsy!

And they sure took their sweet ass time with the test(s). The results were relayed to me (FINALLY!) on 22 January, 2018.

Note carefully how it says sarcoma in that big, long word?

In the layman’s terms it translates to ‘ridiculously, rare skin cancer.’

I have a skin cancer.

Fortunately, as far as those hopelessly pointless growths go, this is a lame one. The percentage of it developing  a mean streak is pretty low. Though there is a chance, it’s not like I am compelled to ‘get my affairs in order’ or anything like that. Not yet.

And so first of all I’d just like to send a massive, rabid, flying f*** y** to the perra at the Chula Vista ‘boob clinic.’ You proved to be an utter boob yourself.

I am actively taking steps to meet with another, more capable doctor in Tijuana. I will have this thing cut out of me as soon as possible. When ever soon turns out to be. I was recommended to someone who is insanely busy.

I am open to other recommendations to have a back up plan if this doctor can’t come through!

The surgery shouldn’t be a massive procedure, but it has to be thorough. There will be more tests and some treatments depending on how it all goes.

I expect follow-ups on this for the rest of my current life as well.

With this condition, there is one case per million per year.

Go ahead. Lean in. Softly whisper to me that I am one in a million.

I’ll blush and giggle and say, “I know.”