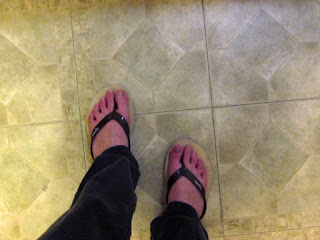 That would be my left one. Yeah. I actually know which is my best foot…

I had hoped December would have been more of a month of reflection. It’s just been another month of tackling challenges.

I’ve started in early on a resolution to have pretty, princessy feet for next year.

So it’s twice daily foot spa and once daily pills. Crazy strong pills. No alcohol and no other medications for me!

I will be missing out on a New Years Eve toast, but what is that compared to having presentable, non… non- contagious, healthy toes?

This month also brought me inconclusive lack of news.

I am still waiting on some medical test results. Sending samples off to the lab before the holidays is never a good idea. Two weeks crawls into three. They should have just told me I wouldn’t have results in hand until next year, but that sounds like a long way off, right?

December gave me some design work. It’s been a little stressful, but the work hasn’t interfered with any grand plans. I mean, I didn’t exactly make any. There is another timeline where I organized an underground, shamanistic rave in TJ… but you know… I’m not in that timeline… so…

I am grateful for the work.  It’s creative! It’s income! Yay!

And then there is the challenge of my ever lovin’ female cycle. For a second month, my body completely dropped it’s immune defenses and let me get sick.  It. Let. Me.  Just me! No one else became ill!

Two months in a row I’ve fought off fevers. After Thanksgiving I got a case of food poisoning. Then Christmas day I was in bed with a cold/flu/whatever. Bones, joints, skin- all hurting -again. And because I started this liver destroying regiment, I could not take anything to diminish the pain or the histamine response. I’m still coughing the rest of it out of my system.  Bless the cold months, eh?

At least I’ve got a head start on a resolution.

I want my new feet to walk me more confidently into the new year.

I feel optimistic about it.

What do you feel optimistic about heading into 2018?