Before I got all my stitches removed, I hauled my butt over to-

I took my DFSP adventure time all the way to Miami, Fla.

We time traveled twice over: moving three hours ahead plus an hour for daylight savings time.
So during that first week, I was simply feeling magical! -as said with a great amount of sarcasm.

I didn’t know how quickly I would feel ready for doing anything.
Before this trip, I was barely recovered of the vampiric drain on my life force from two weeks of- oh hey, I have an open hole in my chest!

(None of you are ready to see those pictures.)

It took so long to get closed up because I don’t live close to decent labs. They needed time to ship samples out and run detailed tests. And I had to get cut twice. In the first procedure they made a 6x7cm hole. In the second procedure they took out everything down to the muscle. Just to be certain there were no more defective cells left in the area. 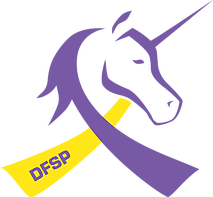 FYI: We are all pretty certain I am free of this cancer.

When I got my graft installed, they also sewed something on to me.
They called it a cap.
I called it my reward for opening a puzzle box.

This cap took tension off the graft stitches and held it down/in place. A completely new realm of discomfort was opened up to me. As you can imagine, I was very happy to have that thing clipped off.

The cap experience still wasn’t as bad as the wound cleaning experience. That was the highest level of pain I think I’d ever experienced in my life.

I wanted to do more than just convalesce on the trip. It was, after all, an artist residency wherein artists create new work and network. Technically, it wasn’t my residency, but I didn’t want to be a glum lump trailing behind.

Spurred by the adrenaline of being in new environments and meeting new people, I was able to keep up. Mostly.

We were tickled to find a moka pot in our apartment’s kitchen. We used to have one in Williamsburg, you see.

Guess what souvenir came back to Rosarito with us?! No, no. We didn’t steal it. We bought our own! Because moka pots are not common out west for some reason?

(Now I can sit here for hours driving myself crazy tweaking this post while sipping a double espresso!)

Our apartment, a spartan, little place, perfect for an artist residency, was located in Wynwood.
It’s a neighborhood hiding under extensive (excessive?) amounts of graffiti murals and street art.
Everything hip is located in Wynwood. Like 16oz juice blends that cost 10+usd.

Above & Beyond: Common Grounds Miami electronic dance music festival was located in Wynwood.
Yes, we attended such a thing. Wearing ear plugs.
I was very disinclined to dance. After three dj stumbling through the same format of soundbites, enough was enough. The dude-bros’ sets really sucked rude objects.

Apparently, there is a prescribed mode of festival dress you must wear when you attend an edm festival. It looked like all the pictures of Burning Man with a sprinkle of Coachella except 200% less glamorous and/or inventive. I saw bandanas worn over faces. Were they expecting a sandstorm?

Yes, music festivals really happened just across the street. Yes, I lost a lot of sleep to two weekends of beats. There was also a loud, bright and early Sunday morning Christian youth event that added insult to injury after the previous night’s revelries cleared out in the wee hours.

One evening was truly unbearable. The concert was pretty good, but the sound systems in the cars that parked nearby almost killed us. The overlapping bass lines rattled the walls and our brains. Bros all wanted to hang out and show off their systems or whatever. Ugh.

Interestingly, a security detail was assigned to stand watch over the residency apartment building through those long, noisy nights.

Zak the Baker is located in Wynwood. I wanted to work there when I saw how much fun everyone was allowed to have. It was the happiest bakery I’d ever been in.
(EAT THE CARBS)

I could walk up a few blocks and see several large scale Anselm Kiefer installations in the Margulies Collection at The Warehouse. Because it’s located in Wynwood. I really, really enjoyed his work in that space.

The doctor told me that I would be able to take out my remaining stitches within the second week of the trip.
My stitches were left in Wynwood. Are they hip?

During my stay in Miami, my strength increased from not being able to carry my own bag to doing a little, silly improv movement at the studio space three weeks later. Here’s an edit of it.

this is the first edit of video i took of myself during my last night at the MANA Miami artist residency at 777 International Mall. audio provided by local artists.
palm tree created out of junked fiberglass boats during the residency by Chicago based creative agency &amp; production house, Ava Grey Designs.

Junk writing aside, much of the residency I spent the time sketching in a blank book that says SKETCH on the cover.
(Hey, I was just doing what it told me to do.)

It had been a while since I’d felt the freedom to just sketch. No pressure… Pencil… Everything erasable… My mind wandered in and around the healing process. A bit Frida-ish of me, but whatever. I came up with some kinda funny/poetic/quirky ideas.

The Human put more presentable, finished ideas all over the walls of his space on the second floor of this shopping mall turned artist studio spaces.

On the first floor there was a room set up to screen Tijuana Bible no.1 and then also a couple of In Memoriams. It was the first time we had seen the videos en large in a focused context. It gave us good ideas for a future project.

I met artists from Chicago also in the residency: Erin, Jan, and a couple of the guys from Ava Grey, Cesar (sp?) and Nick.

From the studio’s location we could walk to a Whole Foods where I ate as many purple fruits and veggies as I could find at the salad bar. Purple. Instinctively I went to the deep colored foods. To match the graft on my chest, I suppose. At the time it was a bruise colored patch.

That patch looks more like a blaster mark now.

I miss those purple salads.

Fueled with Cuban coffee, we walked as much as possible. The city is in building mode. Expansive empty lots dot the city scape. Tall buildings at every stage of construction loomed here and there. Modern’s the name of the game. Or rather, it’s just that other M word- money.

It might be quite the international hub,  but Miami isn’t my kind of vibe at the moment. For me to live there I’d need a good reason. A really good reason.

If you love people and people watching, I recommend paying a visit. Just don’t love the people too much. Posters are everywhere warning about the dangers of syphilis.