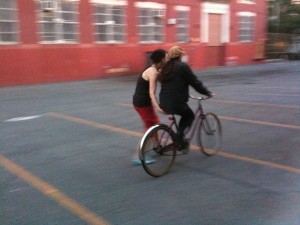 The city is rumbling on around me. I don’t care. I’m still not balanced out yet. Insomnia struck in the early hours. I think I download a bunch of apps hoping sleep would find me.  Sleep must have been on a little vacation. When I did get up to start the day, I was actually sick to my stomach. I nibbled ginger and managed to scrape myself into a pile of human cohesive enough to go out and buy a few needed things. Then it was crash time again. I didn’t nap for a long as I would have liked, but because this was Irena’s day of relative freedom from work, she proposed that we go bike riding. I said, what the heck. I have been  in such a state of mind that I could not even begin to be embarrassed by the 10 year old boy zipping around me in mockery of my struggles – or any of the other people on the street there off of Kings Highway.
So. Today June 2nd, under sunset skies somewhere in Russian Brooklyn a 31 year old learned to ride a bicycle. The seat was uncomfortable as hell so I did not perfect my newfound ability by riding for hours more, but I was able to get around a parking lot without help. This was even more strange to me because I have only ridden a bike in my dreams! That dream moment came to me and blended with my waking reality! It was so liminal.
My day went from  faint pukey distress to crossing off one of those major things on a person’s list of kinda important crap they have to do in life. It is the year of the Snake. These kinds of things are to be expected.– Now. Can I wind down and sleep normally?!