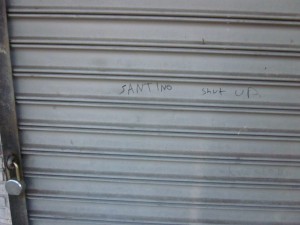 Back from NYC and things are EXCITING in Mexico. So exciting, in fact, that I haven’t been able to recount my trip!
I was able to get over my jetlag easily. I learned from a fellow traveller that you do recover faster when traveling into the future. Go figure!
Along with dodging bullets, I have been celebrating my Human’s birthday all weekend (Superman movie anyone?) and generally feeling a holiday vibe around the joint because Hugo’s brother is visiting from Rome and wants to do vacationy things. We are planning an excursion to Valle De Guadalupe on Thursday so he won’t torture us more with the exemplary entertainment the YouTube has to offer. Life isn’t truly ridiculous until a priest insists on showing variations on the Psy / Gangnam Style theme.
As for my NYC trip: on the whole, I was satisfied with it. I did the things that I wanted- also needed to do. And a collaboration project that I hadn’t been counting on came through. I did some green screen work for a music video! It is a blessing to meet cool people…
My performance in SOAK was satisfactory. I felt it was a great start for grindfilter. I have other ideas I would like to try with it in the future… sooner rather than later, I hope.
Though New York is New York, I didn’t feel the juvenile urge to glut myself on experiences and run crazy to shows workshops and to meet everyone I know. I disappointed a few people, I am sure, but I did what I needed to and there is no guilt feeling in it for me. And thank you peoples for putting up with my weirdnesses and giving me support in one way or another. It did make a difference. I felt something really, really good working behind the scenes. Thoughts / prayers / wishes made and sent in my direction were not laughed at and swatted away by other forces, though.. They did try!