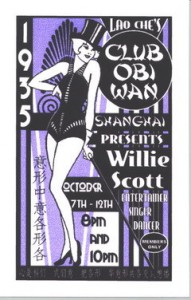 This evening Hugo and I got on the Brooklyn bound 3 train with Anakin Skywalker, Queen Amidala and certain Prof. Jones who was probably coming from some faculty meeting at Columbia University. While Skywalker and Jones chatted quietly, We noticed  a group of other younger folks in the car who were ‘somebodies,’  but in my ignorance I could not name them.
Suddenly, a young Asian man wearing a Yankees cap sprang up from them shouting,
“Dr. Jones! Dr. Jones!”
He ran over and embraced the stunned man in the fedora.
It was none other than Short Round himself! The two of them laughed in their surprise  at seeing one another and asked their companions to take pictures of them together on the train.

This is a strong kind of magic. It cannot stop hurricanes or lousy presidential elections, but it made two strangers from very different parts of the world embrace in public. Sometimes that is enough.