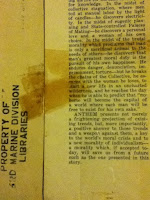 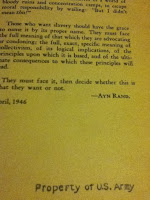 I know I missed the big up-trending a few years ago when Ayn Rand came back into blog / article circulation. I believe the popularity surge was thanks, in no small part, to the stupid activities of certain members of this entity out there in the United States called the Grand Old Party- which is full of good ol’ boys– which should be disbanded for being such a useless, self-serving, penile-centric club- who like to think Ayn Rand wrote another chapter to the their Holy Book- or something.

So why am I dedicating a blog post to this authoress, this would be screenwriter, this denouncer of It’s A Wonderful Life?  Because here is where my little world tangles with this branch of popular culture:

I have one Ayn Rand book- Anthem. It was given to me when I was working in Queens, NY. I keep it because it was a gift and the object itself has some historic value and significance. An unnerving significance, in that it is officially property of the US. Army. It must have been very required reading for all the soldiers who could get into the 3rd Division Marine Library in the 1950’s (or so).

I read Anthem once and that was quite enough for me to feel the author out and consequently, I will not read it again. Nor will I read any of her other books- if I can help it. I understand now why so many are duped into following her propaganda. Basically, all of it- this book anyway, is propaganda against anything resembling Communism. Because one time, in Russia, Communism hurt her precious feelings.

If you read between the beguiling simplicity of the writing,  you can see how it encourages being a dick. Not a detective. Not a straight-talking person- An utter prig. And somehow this is supposed to make the world a better place. Maybe she thought if we were all egocentric prigs like her the world would be practically utopic. That woman was not happy at all in her life.

When I think about how Conservative Christian Americans come to take up her banner, I don’t feel surprised or shocked; not even mildly outraged.  It all really makes sense to follow her teachings if you are going to call yourself a Conservative (contracted, low energy, extra protective, self-interested) Christian in the first place. Swayed by her declarations of freedom, I can only figure that they thought she sounded even better hollering them than the Mel-Gibson-as-William-Wallace. I mean America is supposed to be god’s country and freedom is the god given right we have earned. Yet it’s been ‘earned’ from making niggardly deals with the people already living in this land that used to belong to everybody and then, at length, renege on those deals… But my glorious US History gets kind of weighed down by all these secular facts… That isn’t where a lot of Christian Americans get their information from.

There Christians who think they are really, really clever though.  Like alchemists, they find unnatural ways of coaxing the language of Love and Compassion into mingling freely with Objectivism and Capitalism. They gossip and daydream with the rest of the curiously named ‘Neoliberal’ clique and make up these little fan fictions together; these stories where Jeyand is shipped so hard as THE ONLY OTP that they forget it’s just perverse fiction they are indulging themselves in- with extra thick fiction sauce. Yes, it’s creamy. 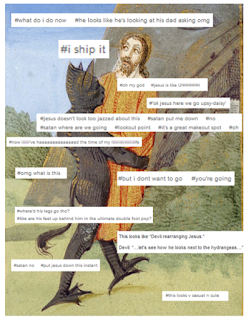 Did I lose you?

I’ll put it this way if you don’t understand the Internet language of girls/boys suffering brain fevers:

Conservative Christians (Mainliners even -wetf that means) and the ‘Neoliberals,’ in the pursuit of their own happiness-interests, throw these wild house parties where they try to get Water–into–wine Jesus Christ and Ayn Rand to snort ultra refined social Darwin dust laced with CC (corporate capitalism), go in a closet -and make a baby. And hope, with fingers crossed, that it wont turn out to be utterly psychotic. This time.

Not only do Jesus Christ and Ayn Rand hate being put in closets together, but all the hopeful ‘babies’ of the messiah they squeeze out just can’t quite function in society without doing harm. Have you noticed the asinine things pouring out of politicians mouths? That kind of crap has been the best they can do. Really. It’s true. Jesus can make crap too. But he was raised by a craftsman- a carpenter. Not a crapenture. I don’t think he’d be very conformist comfortable tied for long to such ill-wrought, ultimately degenerate constructs. It would be overly insulting to all his skills as a being being human.

Jesus would definitely, I think, take the time to go into a nice, safe space with Alissa Rosenbaum and have a real deep conversation about a few things (Cuz, daaamn son. The lady need therapy.), but he wouldn’t dare snog in the dark with that bitchy, argumentative, human farce clouded in cigarette smoke, calling itself Ayn.

She’s like a subtle version of Hitler. Yeah, I know, I just brought Hitler into this thing. How dare I be so… cliche? But here’s the line of comparison: They both suffered slights in their youth and made the whole world pay in one way or another. Adolph didn’t get into art or architectural school and generally had a rough go of starting his adult life. The Rosenbaum family came into hard times when the Communists took over in Russia so Miss Alissa had a bit of a rough time seeing her family flounder while trying adjust to the new social climate. And here we are now, still not able to get over their inability to constructively cope with circumstances beyond their control. They got over it. They are dead. But the rest can’t seem to move on.

So echoes of their whinging can still be heard and will not fall silent for a while yet. It’s just another aspect of the Great Cosmic Joke that these hateful types of people can have near boundless influence through time… and… the names and deeds of so many good (read as great) people will be misused and/or lost in the aggressive excitements that people tend to get caught up in.

Can we do better yet?